It has been quite a rush this past few weeks. The girls are due to be shorn in two weeks so I had to process last year’s fleeces. All of Pela’s fleece is now turned into batts awaiting the big spinning session.

Ambrosia’s 5 week old fleece is too short to spin but it is so soft and curly I just had to card it. I now have 5 batts of something like white lint. I have done a trial felting using merino as a middle layer to provide structure with the “baby lint ” on either side…more on that another time.
I have had a go at making felt buttons, starting with a long thin ‘worm’ layers of fleece are wrapped around until you have what looks like a hairy fat cucumber. This is rolled and battered until it felts. The cucumber is sliced up to reveal the layers! 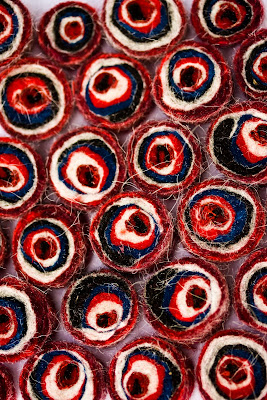 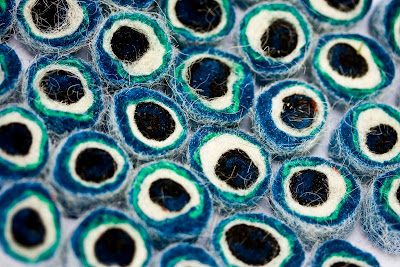